A Taste of Rich Mullins

Summer is my time for reorganization projects, and this week I’m going through old articles–some from magazines, some from newspapers, some from cyberspace–that I’ve amassed over the years.  I used to hand out short essays in writing classes I taught at Judson University to illustrate various aspects of effective rhetorical technique, and the small file I began in the early 90’s now fills two desk drawers, so it’s time to digitize all these and enter the 21st century. 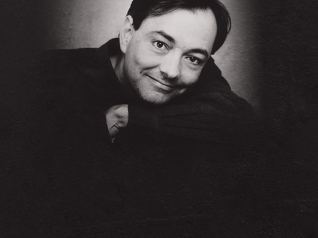 Most of what I’ve saved has come from the creative energies of others, but while rummaging about the other day, I ran across a couple of articles I had written back when I was doing free-lance, feature-article/concert-review stringing for a couple of local papers, the Elgin Courier-News and, on rare occasion, the Wheaton Daily Journal.  During those years, I had the pleasure of getting to know ccm singer/songwriter Rich Mullins at a very basic level.  We weren’t drinking buddies or anything like that, but I did live next door to him one summer (fun story) when he stayed on Judson’s campus while recording in Elgin, and I did end up interviewing him on three separate occasions.  We also brought him to chapel (the quid pro quo for his cheap rent that summer) when I was directing that ministry at Judson.  It was enough so that had someone mentioned my name and put it in context for him, Rich might have said, “Oh, yeah–that guy at that school in Elgin.”  That was about the extent of the depth of our relationship.  (Some Elgin friends knew him better; in fact, Rich gave a house concert in their home a few weeks before he died.  You can access a home movie of that concert here, if you’d like.)

As I re-read the two pieces that ended up being published from those interviews (the third was the best of the lot but was nixed by the powers that were at CCM magazine, for which I wrote a regular column and album reviews, in the late 80’s . . . argh, editors!), I was reminded again of Mullins’ quirky approach to the Christian music industry, and life in general, a taste of which comes through in the pieces below.  (The first article is in two parts and must be read column by column, awkwardly.  Sorry.)  In the midst of various ubiquitous summertime “Taste of . . .” festivals, I hope you enjoy a small “Taste of Rich Mullins.” 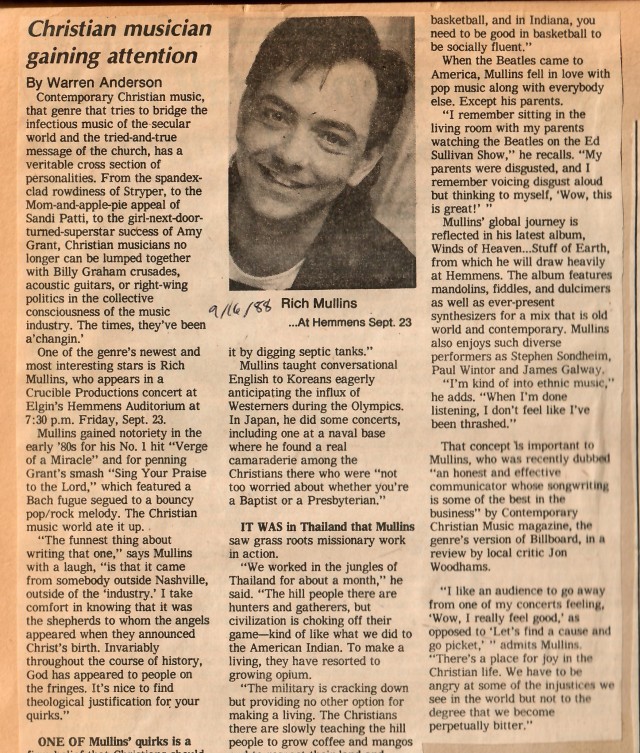 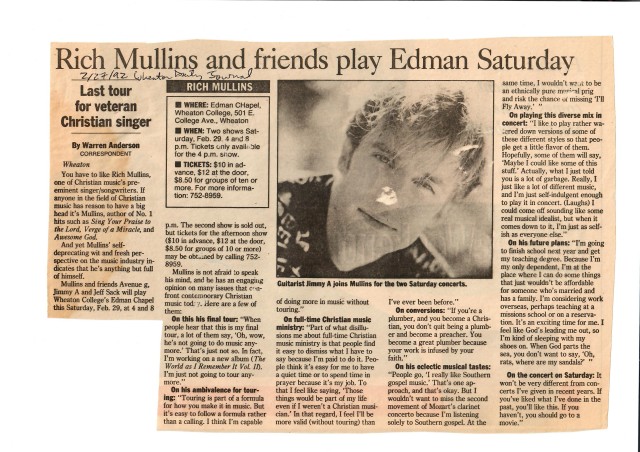 Coming next week (Lord willing): Who knows?  I plan to get around to more reflections on contemporary Christian worship in the American Church eventually.

Emmaus Road Worshipers is written by Dr. Warren Anderson, Director of the Demoss Center for Worship in the Performing Arts at Judson University (Elgin, Ill.), where he also directs the Judson University Choir. A Judson alumnus, he has served his alma mater in a number of capacities over the past 30+ years, especially the chapel ministry, which he led for 22 years. From 1982-2016, Dr. Anderson served six different churches--American Baptist (X2), Converge, Evangelical Free Church of America, Roman Catholic, and United Methodist--as a "weekend warrior" worship musician/pastor. He is a former member of the editorial board of Worship Leader magazine. The views expressed in this blog are not necessarily the views of Judson University.
View all posts by Warren Anderson →
This entry was posted in Uncategorized and tagged Rich Mullins. Bookmark the permalink.

1 Response to A Taste of Rich Mullins