Songwriting Tips from the Experts, Part 8a

Posted on September 28, 2020 by Warren Anderson 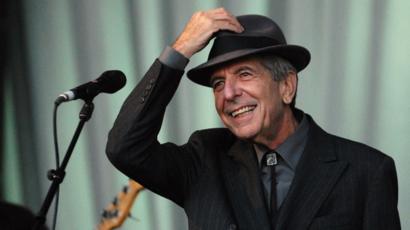 As was the case with Bob Dylan, I came late to the Leonard Cohen party, and I’ve been catching up ever since. Non-aficionados will at least recognize “Hallelujah,” his best-known song, one covered by a slew of artists over the years. (This clip comes from his latter-day tours, which featured one of the smoothest bands you’ll ever want to hear; witness the organ solo at the three-minute mark.) Another classic is “Bird on a Wire,” shown here in 1979, before Cohen’s voice dropped about an octave due to years of smoking and old age. Like Dylan, Cohen, raised Jewish, appropriated Christian imagery in his lyrics throughout his career. The title cut from his final album (not counting a posthumous release), You Want It Darker, is one such example, featuring the sprechstimme (hybrid speech-singing) he often employed for his final albums.

Cohen spoke frequently about the labors of songwriting, which manifested themselves in frequent creative spurts followed by long dry spells.  His own worst critic, Cohen no doubt left some great stuff on the cutting room floor, so to speak.  Here he describes the process by which he winnowed his work in the interview Paul Zollo did with him in Songwriters on Songwriting:

I find that easy versions of the song arrive first.  Although they might be able to stand as songs, they can’t stand as songs that I can sing.

Let’s just stop right there and ask ourselves how often we hear decent songs (or sing decent songs in church) that might, with just a little more care, have become excellent.  Cohen continues:

So to find a song that I can sing, to engage my interest, to penetrate my boredom with myself and my [lack of interest] in my own opinions, to penetrate those barriers, the song has to speak to me with a certain urgency.

To be able to find that song that I can be interested in takes many versions and it takes a lot of uncovering.

“To penetrate my boredom with myself and my [lack of interest] in my own opinions”: These are phrases we’re unlikely to hear too often in our fractured times, unfortunately, when all of us, across all political and theological spectrums, seem so self-righteously assured of our own infallible wisdom.  Indeed, part of Cohen’s appeal, this near-disconcerting self-effacement, comes through frequently in the interview.  Here’s his humble take on the the creative muse:

If I knew where good songs come from, I’d go there more often.  It’s a mysterious condition.  It’s much like the life of a Catholic nun.  You’re married to a mystery.

Cohen had strong opinions, but they were infused with grace, most likely due to the whiplashed nature of the critical consensus of his work throughout his career, sometimes the darling of the intelligentsia and sometimes the butt of their scorn.  Fame is fickle, and so he refuses to take the bait, when Zollo suggests Cohen’s line “[t]he maestro says it’s Mozart, but it sounds like bubble-gum” means Cohen finds a lot of fault with current songwriting:

Some stuff is being promoted as junk and it is great art.  Remember the way that a lot of rock and roll was greeted by the authorities and the musicologists and even the hip people.  And when people were putting me down as being one thing or another, it wasn’t the guy in the subway.  He didn’t know about me.  It was the hip people, writing the columns in the hip newspapers, college papers, music papers.

So it’s very difficult to see what the verdict is going to be about a piece of work.  And the thing that really makes it an interesting game is that each generation revises the game, and decides what is poetry and song for itself, often rejecting the very carefully considered verdicts of the previous generations.  I mean, did the hippies ever think that they would be the objects of ridicule by a generation?  Self-righteous and prideful for the really bold and courageous steps they had taken to find themselves imbued in the face of an unmovable society; the risks, the chances, the dope they smoked, the acid they dropped?  Did they ever think they would be held up as figures of derision, like cartoon characters?  No.

And so it is, with every generation.  There’s that remark: “He who marries the spirit of his own generation is a widower in the next.”

I wonder how many popular contemporary worship music songwriters might find themselves metaphorical widowers in the years to come?

More from Cohen, Lord willing, next week.  In the meantime, consider giving him a listen on your favorite streaming source.  The aforementioned You Want It Darker is part of a late-in-life trilogy (of sorts) that also includes Old Ideas and Popular Problems, both of which address mortality and loss in wonderfully poetic ways.  If you’d like to wallow in one of the smoothest touring ensembles ever to back a singer-songwriter, you can’t go wrong with any of his live albums, particularly Live in London and Live in Dublin.